1 Abstract
2  ELECTRIC NEUTRON STARS
2.1 PROTON SKIN, WHAT IS IT ?
2.2  PROTON VOLCANOES, WHAT ARE THEY ?
3 QUESTIONS
4 ACKNOWLEDGEMENT

All magnetic fields are produced electrically, also the field of magnetars. Their new electric model was partly published by the author in the book The Electric Universe in 1998. The new model is based on the positive charge which is collected in the presupernova´s core via the different masses and sizes of proton and electron. The supernova implosion produces neutrons but only from proton-electron pairs. The protons in overbalance will be fixed on the surface of the neutron body and create a magnetic field and a synchrotron-radiation via rotation. The enclosed proton-bubbles swim upwards. The biggest proton-bubble surfaces at first and explodes into space. This „proton-volcano" kicks the neutron star from the center of the SNR. The later proton-explosions produce only proton-jets.

Why does a neutron star have a magnetic field ? One of the old answers was: the neutron star inherited its field from the field of the presupernova. Chandra, however, showed the Crab pulsar´s two jets in its rotational axis, clearly without precession. Magnetic and rotational axes are identical, but the pulsar pulses. This old model cannot explain this identity and also the non-axial jet (Fig. 1) which was recently discovered by Chandra !

Figure 1 Chandra shows two jets in the rotational axis and a third non-axial jet with circular but unequal cross sections. Only the new electric model explains this X ray picture . A magnetar with dynamo or with frozen-in fields should produce inducted currents in order of 1020 A which would stop its rotation via Lenz-law and resistance-heat immediately. This more recent idea is also not clear. However, the magnetar´s magnetic field is simply produced by its rotation and „proton skin".

The proton has a 1836 times larger mass than the electron. Because of this asymmetry, the protons have a 43 times lower velocity than the electrons in the same temperature due to the Boltzmann-equation. The core will be positively charged, since more electrons than protons leave the core. (See additionally the Zhang-effect below.) During the forming of the neutron body, already 1 cm³ of protons in overbalance form a „proton-skin". This mono-proton-layer is fixed to the neutron body by the strong nuclear force (Fig. 2).

FIGURE 2 The electric model of the neutron stars: the neutron body is covered by a mono-proton-layer which has a simply calculable charge if the protons have the maximal density as shown in this sketch. The star-surface must be divided by the area of one proton. No electric current flows in this star. The rotation of the charge of this proton-skin gives the magnetar´s field and its synchrotron radiation. A second proton layer is inhibited by the first one. This mono-proton layer also inhibits many black holes e.g. the total-collapse of the implosion of 20 sunmasses. It repulses the inner positive star-masses of the implosion after its birth. The electric charge of the proton skin is + 4 · 1020 Coulomb, easy to calculate. In rotation, all skin-protons produce a magnetic field and together 30 GT i.e. 3 · 1014 Gauss for a magnetar. The calculation is simple if we substitute the sphere with a fitting cylinder which is 10 km high:

The electric current of a neutron star is in order of 1020 A which does not flow in the body but it rotates with the body in this model ! Therefore, this star does not need power for the sustaining of its magnetic field. Only the rotation of the protons emits synchrotron radiation which calculably consumes the rotational energy very slowly and very evenly. This spin down due to the synchrotron radiation is well known since decades without an exact model. Now it became calculable ! This positive star produces the cosmic ray particles by its high voltage of +1025 V (easy to calculate via sphere-condensator and charge of 1 cm3 protons !). This highest voltage of the Universe strips the electrons from falling atoms, attracts and fixes them. It repulses the positive atomic nuclei electrostatically along lightyears to relativistic velocities. These are the cosmic ray particles.

2.2 PROTON VOLCANOES, WHAT ARE THEY ?

The neutron body contains not only 1 cm³ of free protons on the surface, but often many m³ of them in the depth. These are partly fixed to the neutrons and to each other, but the strong electrostatic repulsion somewhat expands their volume, therefore they swim slowly upwards. I name them „proton bubbles". They arrive at the surface one after another in thousands of years. Naturally, such „proton bubbles" elevate quicker if they are larger and during a star-quake. A surfaced „proton bubble" explodes into the empty space. The erupted protons form a filament and fly parallel in it, see non-axial, cold filament of the Crab above, three ones in N 49 and 4 filaments in Vela below. The proton filament will be repulsed by the proton skin along lightyears. The result of the strong acceleration is the emission of hard X ray. The rotation of the magnetar shows this proton volcano repeatedly. (Solar proton bubbles explode as X ray bright points into coronal filaments.)

What is the difference between pulsars and magnetars ?

Why is the burst of a magnetar invisible ?

Because it is cold. The eruption of protons causes filaments due to the rule that parallel currents attract each other. No collision among protons is possible. Therefore the HST does not see the X ray-jets of the Crab pulsar !

Why is the strongest peak the first one during an eruption ?

The main electrostatic pressure is first deliberated. The highest charge is emitted with the strongest acceleration which emits the hardest X ray. Later, the proton jet is farther, the electrostatic force is lower and, therefore, the acceleration is lower, the X ray is softer as measured.

Why do the eruptions come irregularly ?

The proton bubbles are enclosed into the neutron body during the supernova implosion. Naturally, their depths are irregular.

Why can we find an X ray active cloud of a diameter of about 10" in the N 49? The emitted protons of proton-volcanoes expanded by their electrostatic repulsion relativistically. This proton-cloud attracts electrons from far away and emits X ray as an anode of e.g. 1012 Volt. The charged cloud in expansion should also emit strong radiowaves, relatively stronger than M1. It swings with the synchrotron radiation.

Why does the magnetar rotate slower days before and during its eruption ? One of the proton bubbles is pressed together to e.g.10 m³ in the depth , but at the surfacing it has already 10 000 m³ due to the lower hydrostatic pressure. This elevates the upper levels and causes a rapid spindown. Probably, a quicker rotation will be measured much later when the „crater" diminishes. A small burst (by a small proton bubble) should not have a strong influence on the rotation. This effect is also measured at the pulsars as glitches.

Why do the pulsars rotate quicker than the magnetars ?

The very big proton bubble surfaced first. It erupted at 0 s (blue). This produced a starquake. Milliseconds later, the waves were reflected to the diameteral antipode where a much smaller proton bubble was accidentally only in a depth of e.g. 5 m in the neutron body. The starquake opened the course upwards and - via a small gap - the smaller proton bubble electrostatically also expanded. 4 seconds later the detector showed it (see red ordinate and letter). This second eruption was surely not independent of the first.

FIGURE 3 The X ray curve of the record-eruption from the hompage of R.Duncan (black) http://solomon.as.utexas.edu/~duncan/magnetar.html. The strong eruption (blue) recurred weakly.

The very strong peak of the very strong eruption was surely caused by a big proton bubble which opened a big crater for itself. The caused proton-filament (see it e.g. in Crab in Fig.1) was repulsed by the proton skin and this acceleration delivered the big peak at 0 s (see blue ordinates, letters and blue dotted line). But 8 seconds later, the peak was low. Why ? The very big proton bubble of e.g.10 000 m³ became totally empty via a big and self-made crater of a diameter of e.g. 10 m. No rest-protons remained in the cavity after 0.25s. Within this very short intervall, the strongest ever measured magnetar-eruption occured. Which force could do this ? The big crater showed its proton covered wall (proton skin) in our direction again and again in rhythm of 8.0 seconds but almost no free protons were accelerated, only those of the surrounding proton-cloud. The peaks of the big crater were very low and almost constant. Oppositely, the weak eruption of the weak proton bubble had probably only a small gap above it in the neutron body due to the starquake. (The highest layers are not superfluid!) Its first peak was only 3% of the peak of the very strong eruption. However, the second peak of the weak eruption at the 12th s returned relatively high! The weaker eruption could not erupt in milliseconds but only slowly as shown by the red dotted line. What is the form of the erupted matter ? Erupted matter as the non-axial jet is shown in Fig. 1 in the beautiful picture of the Crab taken by Chandra. Four systems of knots in a straight line - which are probably jets - are shown in Fig. 4 in the interesting picture of ROSAT. 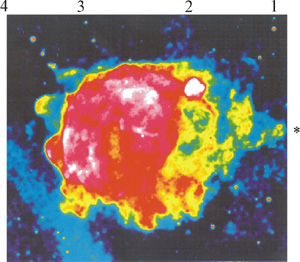 FIGURE 4 The X ray picture of ROSAT shows the 30 000 years old supernova remnant of Vela. Probably, jets appear as knots in a straight line above, in direction of the four numbers 1,2,3, and 4. The jet-velocity is obviously much higher than that of the remnant at least by about 100%. This picture shows impressively that the hot supernova is slower than the cold electric jet-explosions. The biggest cold explosion kicked the pulsar out from the center. Will Chandra show this big jet on the right (*) ?

FIGURE 5 Sketch of the four proton-jets of the Vela pulsar. These were ejected along the course of the pulsar during the last 30 000 years. It is known since many years that the extrapolation of the jets (dotted lines) cross the course of the pulsar (arrow). Now, the electric model explains this fact. The first biggest jet is not shown. It should be on the right (Fig.4) if it kicked out the pulsar from the center of the SNR to the supposed direction of the arrow.

Three jets can be seen in N 49 of the LMC ejected by a magnetar of the 1979 March 5 event. These are also quicker than the expanding X ray active cloud of a diameter of about 10 arcsec. Why does the ejected matter form a jet and not a round and hot nebula ? The ejected matter is positive and, therefore, has the pinch-effect. The jet contains the most matter in its front when the electrostatic pressure is maximal in the proton volcano (Fig. 1). Later the jet is thinner and thinner (in sketch 5 not shown). Its positive charge attracts electrons from far away and emits X ray as an anode and not by heat ! A hot ejection would produce a hot nebula in which all particles push all particles directly or indirectly, therefore, a round nebula came into existence.

Prof. S. N. Zhang (Uni. Al. Huntsville, USA) not only confirmed that the temperature gradient separates the electric charges due to the different masses of the protons and electrons - in hydrogen burning stars - but he showed that also the photons push outwards the larger electrons stronger than the smaller protons. This separation of the electric charges is important for the whole astronomy ! The positive charge overbalance of the stellar core automatically explains all properties of the magnetars.